Jacquée T. is an authoress, poetess, and former newspaper columnist for 'Letter from Chicago.' She presents articles and suggestions to appeal to the romantic in you. "Living life romantically is a matter of perspective." she says.

Wine Notes
Delicious tastes of wines, venues and the regions.

The Green Romantic
Part of being a romantic is loving
- and defending! -
the environment

Travel
Places, and means of travel that inspire the romantic in you.

Cinema
Jacquée T.  presents movie suggestions and venues from a Romantic's and a devout writer's perspective.

Sign up to be on the
Romantic's
Red Carpet list
and be among the first to hear about Jacquée T.'s events and upcoming e-books, and also receive exclusive special offers.

Three things I’ve learned about Lawrence Kansas – as a pedestrian

I’m fairly new to Lawrence Kansas. Here are things I learned as a pedestrian getting around.

1. Folks endearingly refer to Lawrence as the “San Francisco of the Midwest.”
A couple gals with whom I chatted at a boutique shop told me that. ‘Twas because just as San Francisco was hilly, so was Lawrence. Intriguing analogy, I thought.
One of my previous beaus was from San Francisco. I’d visited him there oft; we oft promenaded the hilly declines and inclines, and took them in stride. Now as I spoke to these ladies, I’d been in Lawrence for a good week, and had taken a friend’s Shih Tzu pup, Sophie, for daily walks. I’d prompted Sophie along steep inclines and declines. I sure felt the inclines in my legs, and am quite sure hearty Sophie felt them in hers.
2. Many o’ city street namesakes are states.
Heading west from downtown on foot and deep in thought, I awoke to observation that street signs donned state names.
I’d noticed Vermont, Tennessee, Ohio, Indiana. This as I headed from Massachusetts 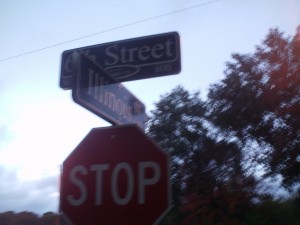 Street, that is endearingly referred to as “Mass Street.” I contacted Christine Metz Howard, Communications Manager at the Lawrence Convention and Visitors Bureau. Is there a street for every state in the Union, I asked. No, she replied.
Surprising, I said. If so many states were brought to street names, why not all?
The reason was layered, Ms. Metz Howard replied. Lawrence was founded in 1854 by a New England abolitionist group with mission to keep Lawrence Territory free from slavery. They named Massachusetts Street as the hub. Adjacent streets east were named after the remaining 13 original states. Adjacent streets west were named via the order states were annexed into the Union. But not all of them.
The abolitionist group omitted pro-slavery southern states. However in post Civil War years, some southern states made name to Lawrence streets. But not all.
Eventually the enthusiasm for naming streets after states dwindled altogether. Accordingly, Lawrence has 36 streets with state namesakes. One is Illinois Street. This gal who arrived from Chicago stumbled upon it via one of her walks.
3. Motorists yield to pedestrians.
As a gal who had been a Chicago pedestrian for years, I’d become inured to the fact that here motorists zoomed forward oblivious to any pedestrian not directly in front of their vehicle. Though I had legal “right of way,” one step forward to assert that right could cost me a kneecap or toe. I therefore developed habit to pause for motorists — at stop sign crosswalks, and at Green light freshly-turned “Walk” signals for motorists running the red light.
These habits became “autopilot.” Yet in Lawrence I noticed motorists remained stopped as I approached crosswalks; they reached full stop before my Green “Walk” light shone. This perplexed me, and I paused with furled brow.
Motorists waved me forward, furling their brow if I paused too long. Yet I learned to wave thank you and proceed, and believe I might survive this overt pedestrian-motorist courtesy, kneecaps and toes intact.

* There are more things I learned about Lawrence. I’ll share them in future weblog posts.*