Jacquée T. is an authoress, poetess, and former newspaper columnist for 'Letter from Chicago.' She presents articles and suggestions to appeal to the romantic in you. "Living life romantically is a matter of perspective." she says.

Wine Notes
Delicious tastes of wines, venues and the regions.

The Green Romantic
Part of being a romantic is loving
- and defending! -
the environment

Travel
Places, and means of travel that inspire the romantic in you.

Cinema
Jacquée T.  presents movie suggestions and venues from a Romantic's and a devout writer's perspective.

Sign up to be on the
Romantic's
Red Carpet list
and be among the first to hear about Jacquée T.'s events and upcoming e-books, and also receive exclusive special offers.

March 16, 2018
___ The Shamrock is the most universally recognized symbol of Ireland, and is recognized in Irish folklore. 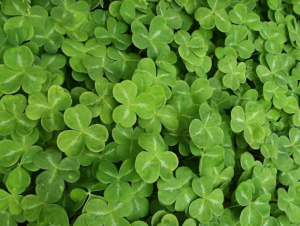 American Heritage Dictionary defines “Shamrock” as:
— Any of several plants, such as a clover or wood sorrel, having compound leaves with three small leaflets, considered the national emblem of Ireland.

Note, it says “considered” the national emblem. Yet, according to information I received from Tourism Ireland the Shamrock is not the Emerald Isle’s national emblem — the Celtic Harp is.

The Tourism Ireland document describes Shamrock:
—“The Shamrock itself is a three-leafed old white clover. It is sometimes of the variety Trifolium repens (a white clover, known in Irish as seamair bhán) but today usually Trifolium dubium (a lesser clover, Irish: seamair bhuí). The diminutive version of the Irish word for “clover”, “seamróg” (anglicised as “shamrock”) representing a close approximation of the original Irish pronunciation. ‘Seamroy’ itself means ‘little clover’. The plant itself is a very common clover that grows throughout Ireland.”

More information and fun facts shared in the document provided by Tourism Ireland:

An Irish blessing:
There’s a dear little plant that grows in our isle,
‘Twas Saint Patrick himself, sure, that set it;
And the sun of his labor with pleasure did smile,
And with dew from his eye often wet it.
It grows through the bog, through the brake, through the mireland
And they call it the dear little Shamrock of Ireland

Another interesting fact: snakes are never seen in fields of shamrocks anywhere in the world, and shamrocks can be used as a remedy for snake venom.

There is no mention of shamrocks St. Patrick’s writings. However the shamrock is a symbol found on many medieval bishops’ tombs, including St. Patrick’s.

Have you ever seen a Shamrock field?

This Jacquée T. ‘Love for Words’ feature is brought to supporting sponsors including Aromaface All Natural Skin Care.

*** Jacquée T. selects and schedules each featured Word in the spirit of writing, reading, and of improved expression. Love for Words sponsors support her schedule and selection as a whole, and the fun spirit of this series. Please check out the links to sponsor websites, one link provided per word, and see how they may add inspiration to your day.